Working Under My Idol

Not only was Raffaele working with his boyhood hero at his new club he was also working under a very determined and passionate character. Paolo has always been noticeable in the game for his sheer emotional connection with football.

The Italian was a very driven manager who had the desire to achieve success and prove himself as one of the top managers in the game, as he did as a player winning Serie A and the UEFA Cup in an illustrious playing career. The former Juventus and AC Milan forward was not scared to make big decisions at crucial times and most importantly would do anything to help his teams succeed.

Having retired from professional football in 2008 and completing his coaching badges, Paolo had successfully interviewed at Swindon Town and was appointed manager of his first club in 2011. De Vita, who idolised Di Canio as a kid, was aware of the type of person he was and had spent hours watching clips from his career up until his appointment. However, he learned so much more about his character whilst playing under him.

“He is a unique character and a bit mental. He’s just not like every other manager, I think because he’s such a perfectionist he wants everything to be absolutely perfect on the training ground.”

Di Canio As A Manager

“As a manager he works so much during the week towards the game on Saturday’s and if he doesn’t get what he is looking for he takes it personally. When we lost a game, we felt like it was the end of the world, we felt guilty and knew we had to win the next game to put it right. Fortunately, we didn’t lose often, especially during the first season when we won promotion. But Paolo knew how to get the most from us in every game.”

There were many similarities between them, with both being born in Rome, supporting S.S. Lazio and spending part of their career in Scotland and England. But many of the players, especially Raf, were surprised by his attention to detail and the level of preparation he went into for every opponent. High standards were always expected at training. He carried the upmost professionalism around the club and his analysis of the game was second to none which Raf was starting to realise in the weeks after his appointment.

“Paolo worked so much and he provided you with so much information about the other team. Even in League Two, he knew everything about every player, which was a surprise because he had such a high profile career at the top of the game. For example, if I was playing as a winger in a game, he would tell me exactly what my opposing full-back was like. Every single day he’d watch hours of videos and clips and you basically went out on a Saturday and he’d already played the game for you.”

“He knew exactly what you would come up against, you were never surprised. He knew the strengths and weaknesses of your opponent. He made it very easy and if you were not doing your job, he was on to you, there were no excuses.”

“A few of the boys found it difficult to adapt to him but I managed to get my head down and accept the criticism because he was one of those managers that would just take you off. When the game started, he’d give you 10 maybe 15 minutes and if he wasn’t happy he would take you off.”

“He wasn’t one of those managers who cared if he made you look stupid and he wasn’t afraid of making big decisions. He only cared that you were giving 100%. It was very intense but a huge privilege to be coached under him because I have learned so much on and off the pitch.”

De Vita left Swindon Town at the end of his contract and joined Phil Parkinson’s Bradford City in 2013. Signing a one-year deal with ‘The Bantams’, Raffaele got off to a promising start assisting Rory McArdle’s late equaliser in a 2-2 draw with Bristol City.

He scored his first goal for the club against Wolverhampton Wonderers where they ran out 2-1 winners on October 26thbut unfortunately suffered a thigh injury early on, which kept him out of action for the majority of the season. During his spell in Yorkshire, De Vita played with some other high profiled players including the likes of John Stead, Matty Taylor and current Burnley forward Nakhi Wells.

“Nakhi was probably the standout player there, he was just a player that from the first minute you watched him you knew he was going to play at a higher level.

“You knew that come the end of that season he would get a chance to test himself at a higher level and he got his move to Huddersfield. I think he moved in January when I was there but personally it was a brilliant experience playing for Bradford City even though I had struggled with a bad injury since October and I couldn’t get it right by April so I kind of wasted a season, I loved being there.”

“When you look at the stadium and fanbase at Bradford you wouldn’t believe they are a League One side. It’s a massive club and the fans are so attached to the club as well. It’s a Premier League club the way the fans follow the team, even away from home you would get 4 or 5 thousand there on a Tuesday night.”

Raffaele in action for Bradford

After a full season with Bradford, Raffaele’s contract expired and he left the club, signing a short term contract with Cheltenham. Before signing for Cheltenham, he featured in Bradford’s pre-season training in the lead up to the 2014/15 season in the hope of earning a new deal but was not offered a new contract and left disappointed. However, he did leave with some great memories from his time at the club.

“Obviously I was sad to leave at the end of the season because I would’ve loved to have another chance and stay a bit longer. But it’s a good family club and the players were a good group of lads, with quite a few talented players as well.”

“For me, the best game in my time there was against Wolves, they had just been relegated from the championship and were a premiership side the season before. That game I played, I scored and the stadium was completely full, I think there was over 20,000 fans there. It was a brilliant game, although I think we lost 2-1 in the end, it was a brilliant match and I think that was one of my first few matches for the club, so I was very excited. I thought there would have been a lot more games like this coming but obviously the injury prevented me from that.” 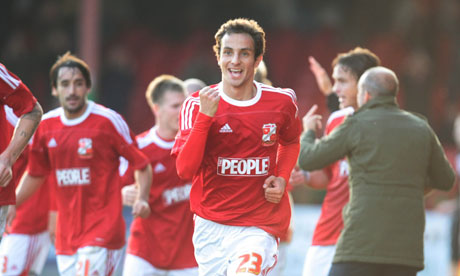