Raffaele Moves Back To Scotland

Cheltenham Town captured De Vita’s signature on the 25th September 2014 and after a brief stint making thirteen appearances, he was released in December paving the way for a move up north to the Scottish Highlands. Ross County signed Raf on the penultimate day of the January transfer window in 2015 and it was a big change moving to Dingwall having spent time at Bradford and Cheltenham in the previous two seasons. It took time to adjust to the new surroundings and the fact that away games were so far away, however, Raffaele soon got used to it and was made to feel very welcome by manager Jim McIntyre.

"It was a big shock because obviously the Highlands are a unique place in terms of where they are on the map. I remember the first time I went up there, I just couldn’t believe how long it took me to get there and I felt like it was the other side of the world, to be honest. I think if you’ve got your family and kids there and you don’t need to move it’s a brilliant place to live. It's different down here because I mean if you are based in Glasgow there are people living all over the place in like Edinburgh and Dundee whereas up there its easier to bond because a lot of people are out for coffees or meals at night but I got used to it and I was really close to a lot of the lads as we all lived together."

Having previously worked under his hero Paolo Di Canio and other managers such as Phil Parkinson & Gary Bollan, Raffaele got used to working under Jim McIntyre for the first time in his career after signing for ‘the staggies’.

"I enjoyed working under him and Billy Dodds as well, he was a good coach. The training was very different from Di Canio in terms of tactics there wasn’t a lot of shaping it was more short and sharp, high-intensity games and stuff and passing really but it was very different. When I was at Swindon Di Canio wouldn’t give you a day off whereas McIntyre just wanted the mood to be buzzing around the place all the time. The training would be an hour maybe an hour and a half, short and sharp just trying to get everyone motivated for the game."

De Vita’s debut in the Highlands was nothing better than what he wished for after scoring the winner against Motherwell in a 3-2 victory. Three months later he was named the SPFL Player of the Month for March and the impressed the following season to help the club avoid relegation from the top flight.

In his time with the club, the Italian was part of the side that won the Scottish League Cup defeating Hibernian 2-1 in the final while also reaching the Scottish Cup Quarter-Finals before losing out to Dundee United. In the same season, Jim McIntyre led ‘the staggies’ to a top sixth finish including back-to-back victories against Aberdeen in the League and a Scottish League Cup semi-final victory over Celtic. De Vita thoroughly enjoyed his time up north and will never forget the success which was achieved in his time there.

"The cup final was a brilliant day for the club, we scored in the last kick off the game. Obviously there was a lot of people who came down from the highlands. I was really happy because that was probably the biggest achievement for them in their history."

Raffaele was released by Ross County in the summer of 2016 and returned to Livingston for a second spell in October that year after being without a club for four months. He re-joined the West Lothian side who were currently competing in the First Division.

After making a total of 56 appearances during his second spell at Livingston, Raffaele was sent out on loan to Championship side Partick Thistle where he made 9 appearances netting once for ‘the jags’. 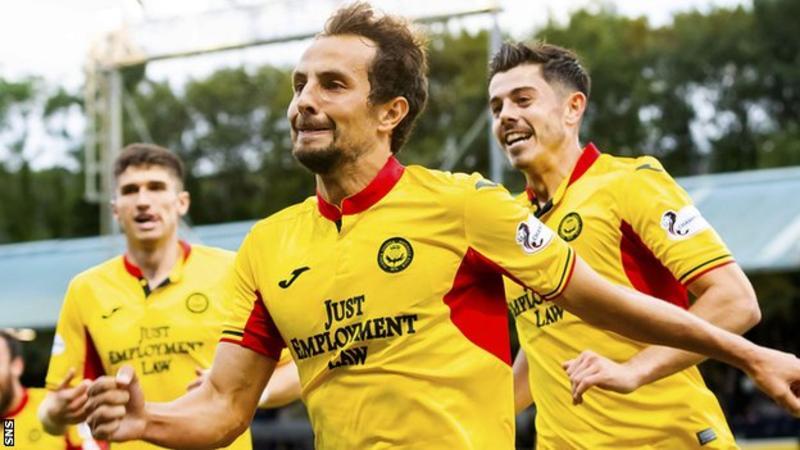 The following season, Raffaele was loaned out to League One side Falkirk in January where he joined up with former teammate Lee Miller. During his spell at Falkirk, Raffaele made 6 appearances until the season was postponed due to the coronavirus pandemic.

As De Vita returns to Livingston now that the season is set to resume on August 1st, everyone at Superior Sports would like to wish Raffaele and Livingston the best of luck for the 2020/2021 season.